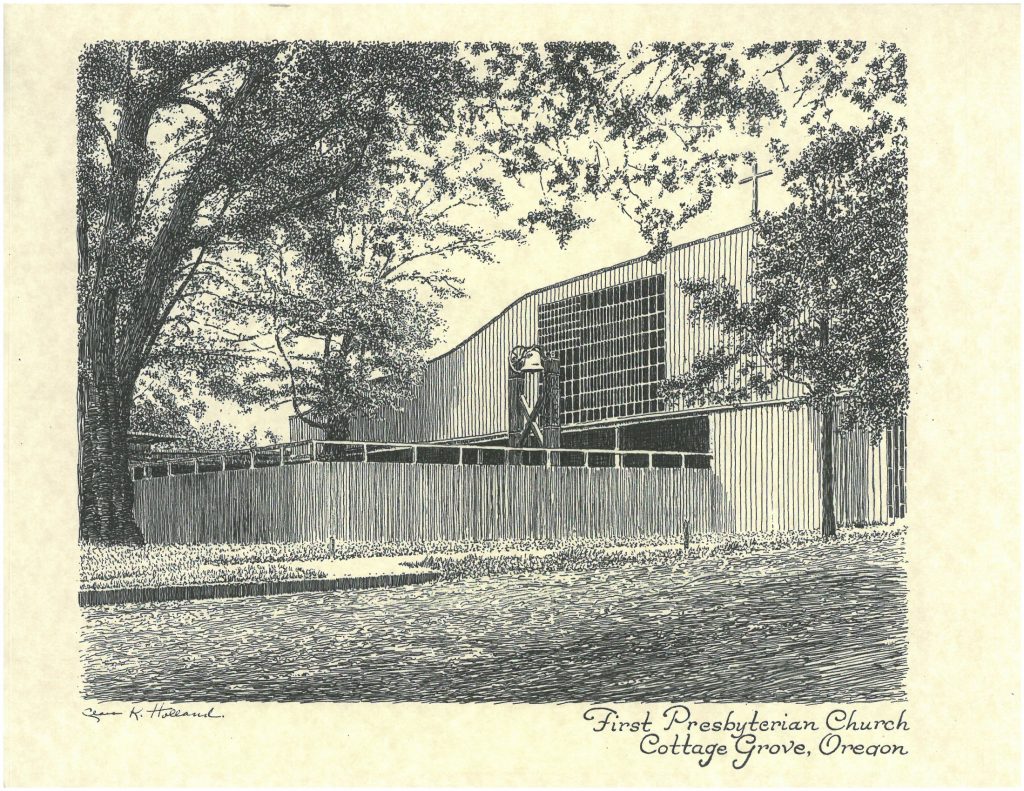 On the first “Sabbath in July, 1855,” twenty-two settlers living in the Cottage Grove area gathered “to build themselves into a God-fearing community resembling in part, the places they had left,” naming themselves the Coast Fork Congregation of the Cumberland Presbyterian Church.

The organizational meeting took place east of the present Currin Railroad Bridge, in a schoolhouse under an oak tree on the “banks of the picturesque Row River.” Early records show that the church met in a variety of places, often in schools, scattered from Latham to Walker to Cottage Grove.

The church was part of the Cumberland Presbyterian Church, a missionary church that followed the westward movement across the county.

In 1873, the congregation decided to build a permanent building. Together with the lodge of the Good Templars and a gift of land from the Hazelton family to both organizations, a building was built on Main Street in Cottage Grove, south of the current bridge. It served both groups, with the Templars on the second floor and the church on the first floor. The church portion of the building was shared with two other congregations, each meeting on different Sundays.

Numerous ministers served the pioneer church only with preaching. Most worked without pay, but took whatever might be given to them. The first regular pastor arrived in 1888, The Rev. W.V. McGee.

In 1891, the Ladies Aid Society was organized, supporting efforts of the church by raising funds through bazaars and serving meals. The funds helped support the pastor and to fund the new church building and its furnishings.

In 1892, the first full time minister, C.A, Wooley, was installed and a new church building was completed, which stood on the corner of Seventh and Locust (now Adams). In all, twenty-four different pastors served until 1947.

* * * * * *
In 1947, the Rev. D. Hugh Peniston arrived and remained as pastor for 32 years, the longest ministry in the church’s history. Under his ministry, a number of important initiatives began.
• The first pipe organ was purchased.
• A building committee and fund drive were undertaken, culminating in the present building at Third and Adams, dedicated in 1951. Designed by the renowned architect, Pietro Belluschi (a disciple of Frank Lloyd Wright), it continues to attract the attention of architects around the world.
Our building is on the National Historic Registry and is considered to be one of Belluschi’s most beautiful church designs. The smallest church he designed, it was built of lumber milled in Cottage Grove. Over the years, the building has been maintained and some updating done, keeping the original integrity of the structure and design.

Outreach programs to the local community were held in the church:
• Head Start was housed for a number of years in the Fellowship Hall.
• The Montessori School used the nursery rooms for over 10 years, providing the first early and preschool education in Cottage Grove, jointly using the space with the church.

• A low-income county housing facility received meals prepared in the church’s kitchen. Meals were also delivered to seniors at home. Accommodation for shared use by church members was key to its success.

Building low-cost and senior housing was an effort led by the pastor, with members serving on the boards of Rainbow Village in Springfield, Jefferson Park Apartments, and Witherspoon Court in Cottage Grove.

Many social relief agencies in Cottage Grove owe their genesis to efforts of the First Presbyterian Church during the 1980s and 1990s. Our members continue to serve on their boards.

• Community Sharing, a community assistance organization, was formed in the early 1980s with dedicated leadership from church members and the interim pastor.

• South Lane Mental Health was formed after a woman with mental illness was discovered living in the church. Today it continues as a vital agency providing mental services plus a live-in facility.

• The church joined the Sanctuary movement.

• The church joined with five other churches in Cottage Grove to bring a displaced hill tribe family from Laos to Oregon.

• The church became affiliated with the More Light Church organization, welcoming LGBTQ people to the ministry and mission of the church.

• The church supported the farm worker movement and became an Earth Care Congregation, a part of the Presbyterian Mission Agency’s commitment to the environment.

• In January, 2019, the church was certified as a Hunger Action Congregation, a part of the PC(USA) commitment to alleviating hunger in the country.

Please join us for Worship on Sundays at 10:00 AM